Security Threats With The Most Impact on Aviation

Security threats to the aviation industry are a serious matter. There will always be people who wish to do harm to the industry, the professionals working in it, and the civilians utilizing its services every day. This constant pressure from outside forces means the industry can never rest when it comes to security. In fact, it must be proactive to stay ahead of the dangers threatening aviation.

Aviation security threats targeting commercial aviation and air cargo are incessant. From minor to extremely serious, the range of threats and attempted attacks vary on a day to day basis. We’ve comprised a comprehensive list of threats with the most impact on aviation. Let’s take a closer look at these aviation threats.

Laser Illumination: Laser pointers may seem like an innocent gadget, but they can be used in malicious ways. When lasers are pointed at aircraft, the cockpit illuminates so brightly that pilots can feel disoriented and experience temporarily blindness putting the lives of passengers and civilians at risk.

Cyber Attack: With the advancement of technology, cyber security has become an increasing concern especially since these types of attacks are inexpensive to carry out. They can target computer systems on the ground as well as those used while aircraft are in-flight, causing a broad range of disruptions and damage.

Missile Attack: Surface-to-Air Missiles (SAM) and Man-Portable Air-Defense Systems (MANPADS) are extremely dangerous in the wrong hands. These powerful weapons are capable of taking down flying aircraft with just one shot.

Conflict Zones: Traveling over areas of conflict is too risky. Any aircraft flying in close proximity could become a target. Alternate routes of travel must be mapped out to avoid conflict zones at all costs. 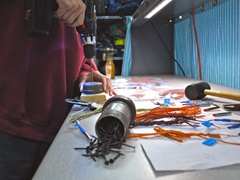 Explosive Devices: Improvised Explosive Devices (IEDs) are constantly evolving. They have been hidden on persons, within pressure cookers, printers, and Personal Electronic Devices (PEDs) such as cell phones and laptops. IED concealment tactics change frequently so staying ahead of the ingenuity can be difficult. IED Basics Blog. Threat PEDs Blog.

Landside Threat: Landside is typically unrestricted and can be accessed by more people than airside. Ticketing counters, security queues, baggage claim, and car parks are just a few areas of landside that are more vulnerable to attack.

Aircraft Hijack: Although hijackings do not occur as frequently as they once did, the threat still exists. When aircraft are seized by hijackers, airline crew and passengers become hostages for negotiation. 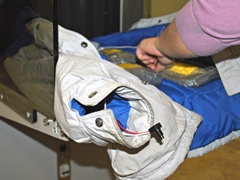 Suicide Bomber: Suicide bombers detonate explosive devices attached to their body. They are prepared to take their own life and the lives of people around them. A suicide bomber can strike anywhere including landside or airside. Suicide Bomber Blog.

Terror Organizations: Terror groups are capable of influencing people of all backgrounds to join their cause. They specialize in recruiting people to carry out attacks with them or on their behalf.

Lone Wolf: Lone wolf attackers are individuals who act alone, but may support or be influenced by various terror organizations. Other times, they are motivated by their own rationale to carry out attacks against aviation.

Chemical Attack: The release of chemical agents, poisonous gases, and toxins is a new kind of threat tactic. Use of these to target aviation could be deadly if released on airport premises or within a flying aircraft.

Threats against aviation vary far and wide. If successful, threats such as these would significantly impact the industry. That’s why steps have been taken to proactively monitor attacks intended to target aviation. What other aviation security threats exist? Share your thoughts below.